← Return to Projects and Posts

Where in the World are Trader Joe’s Warehouses?

Trader Joe’s is a popular grocery chain in the United States. Owned by Aldi Nord of Germany, Trader Joe’s has the reputation for being tight-lipped about its business strategy and plans. This Fortune article provides a good backgound.

As of June 2015, Trader Joe’s has about 450 stores, and in my hometown of Iowa City, there are often rumors about whether a new Trader Joe’s will be opening soon. Search on the web, and you’ll find that lots of people want more stores. Trader Joe’s also has a website for people to request a new location in their own city.

Undoubtedly, choosing the next store location is a critical business decision for Trader Joe’s. The above Fortune article discusses how the distribution network (of vendors, warehouses, and stores) plays a role in choosing the next location. It makes sense that a good location would be fairly close to an existing warehouse.

So, if one wanted to predict where Trader Joe’s might open their next store, it is logical to first figure out the locations of its warehouses. However, Trader Joe’s does not make this information public (at least as far as I can tell). You can find clues on the web. For example, there appear to be warehouses in the following cities:

Besides scouring the Internet for evidence, is it possible to intelligently guess the locations of Trader Joe’s warehouses?

Starting with the definitive list of Trader Joe’s stores, I extracted the street addresses of all 451 stores and retrieved the latitude and longitude of each store. Then I used k-means clustering to group the 451 stores into 22 clusters, each with its own center. These 22 centers are my best guess as to where the warehouses might be.

Why 22 groups? Trader Joe’s does not even announce how many warehouses it has. To apply k-means clustering, one has to guess a number of warehouses—or clusters. I chose 22 because this is approximately the square root of 451, which means that each warehouse would serve on average about 22 stores. This seemed like a balanced guess, but it is just a guess. 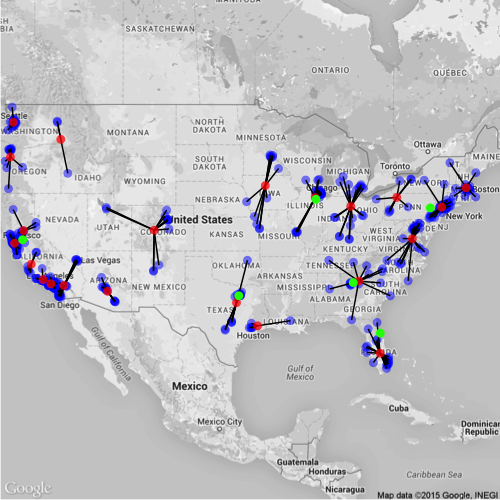 ← Return to Projects and Posts